In our last blog we gave you a few tidbits of the upcoming AE v1.5, well today we’ll lift more the veil of the largest single update since launch and we hope you are as excited about it as we are.

Lets start with a new feature that will be on the Interactive Map which will have the option to display guild bases in recently scouted regions as you can see in the image below. That can give you the idea of the guilds present in the scouted galaxy.

To help with the earlier stages of the game there will be a boost to new bases construction capacity. This will give new accounts a faster start and should make the first few hours of a new server very exciting!

We’ll also be introducing a new technology, Anti-Gravity which will decrease the construction time of orbital structures and boost the speed of Death Stars.

There will be tweaks to a number of capital ships to mix up the higher levels of the game and get some of the less used ships into play. Dreadnoughts, Titans, Leviathans and Death Stars will all be given a small speed boost. The Death Star will also be given an small attack and armour boost while the Titan will also get an small attack boost.

To make scouting a bit easier the faithful Scout Ship will also be getting a speed boost.

And last but not least the game interface will be given a full overhaul with the aim of making Astro Empires simplier to play. With the new interface we’ll be launching structure images into the game. Below you can see an example that shows Urban Structures on various astro terrains. And you can can see part of the evolution of the Robotics Factory in the second set of images. 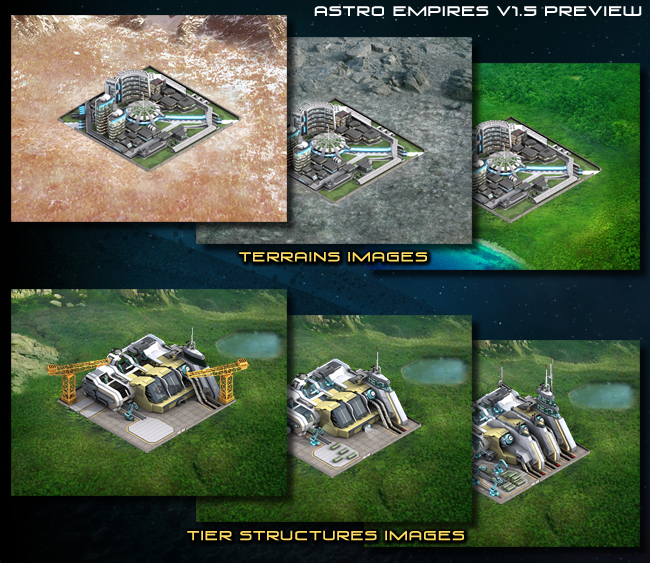 AE v1.5 will be implemented in all game servers and is slated for release in October though some of the features mentioned are still subject to change.

Let us know your thoughts about AE v1.5 on the Community Portal, Facebook and AE Forums.